Protect yourself against cold and flu by adopting these habits that will strengthen your immune system.

First: Strengthen the immune system to prevent cold and flu

Medical School researchers found an explanation for our susceptibility to influenza virus during the winter. These microorganisms survive longer when temperatures are cold and dry, promoting their spread in droplets of water and air. As for the common cold, which is caused by over 200 viruses, it is unlikely to escape all. 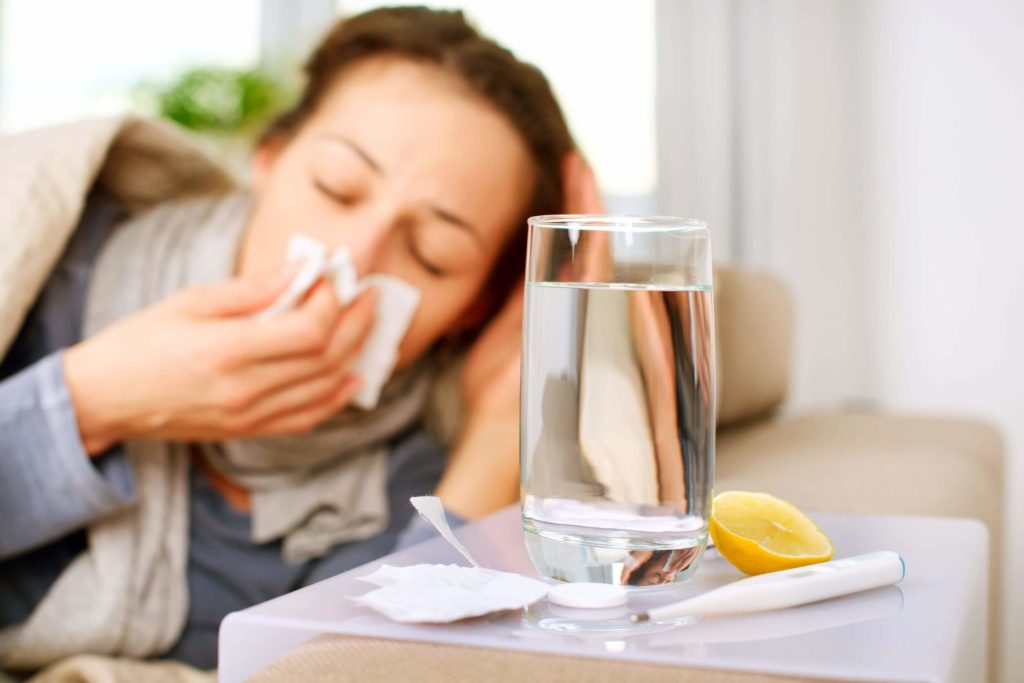 A positive view of things can make the difference between getting flu or not. “People are happiest are less likely to get a cold when exposed to several types of viruses.” In its studies, it was observed that people who said they were less happy, less calm, and lacking vitality were three times more likely to get sick than those who saw themselves more positively. Among the latter, cytokine production, a protein responsible for regulating the immune response, is high enough to mobilize other cells of the immune system in its fight against infection, said psychologists. 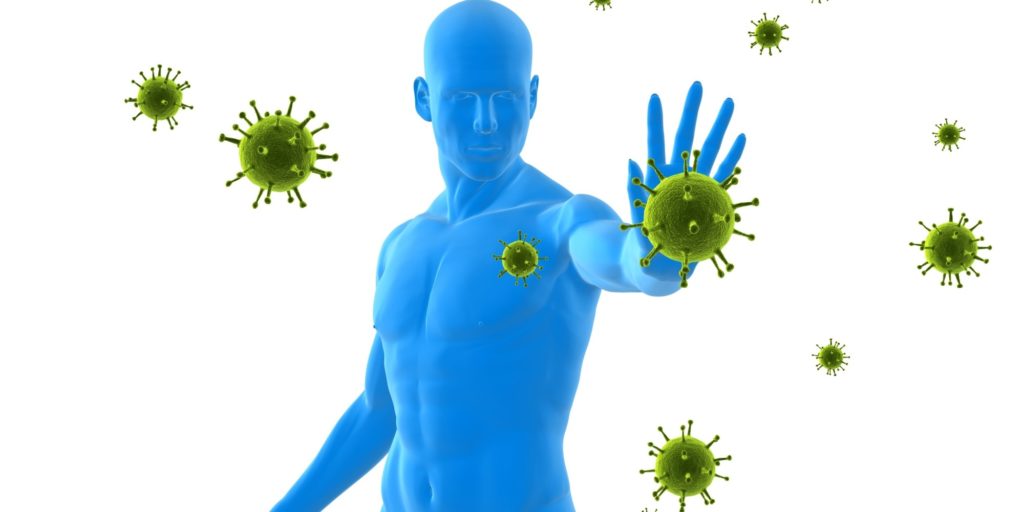 According to the results of a study published recently in the American Journal of Medicine, the risk of catching cold increases when a person ceases to be active. Researchers from the Cancer Research Center in Seattle measured the incidence of colds in 115 women divided into two groups: those were the first five exercise sessions of 45 minutes per week, while those of the second session was one ’45 minutes of stretching. These were almost four times more colds than others in one year. “We believe that the number of active immune cells temporarily increases each time a person does the exercise.”

Forth: Wash your hands

“To stop the spread of infection, hand washing is probably one of the public health measures most revolutionary, tied with vaccination.” After all, just get in touch with the cold virus or flu and then touching your eyes, nose, or mouth to be infected. The authors of a review of studies published in 2008 in the British Medical Journal that emphasize hand washing is much more useful than antiviral drugs to reduce the risk. However, it is essential to do good wash 20 seconds with warm water and soap. Professionals advise washing your hands several times during the day, especially before and after eating, after using the bathroom, when coughing, sneezing, or touching objects that have been manipulated by ill people. Especially, do not use soaps, lotions, and antiseptic gels, which might promote resistance of bacteria. Instead, use alcohol-based gels. 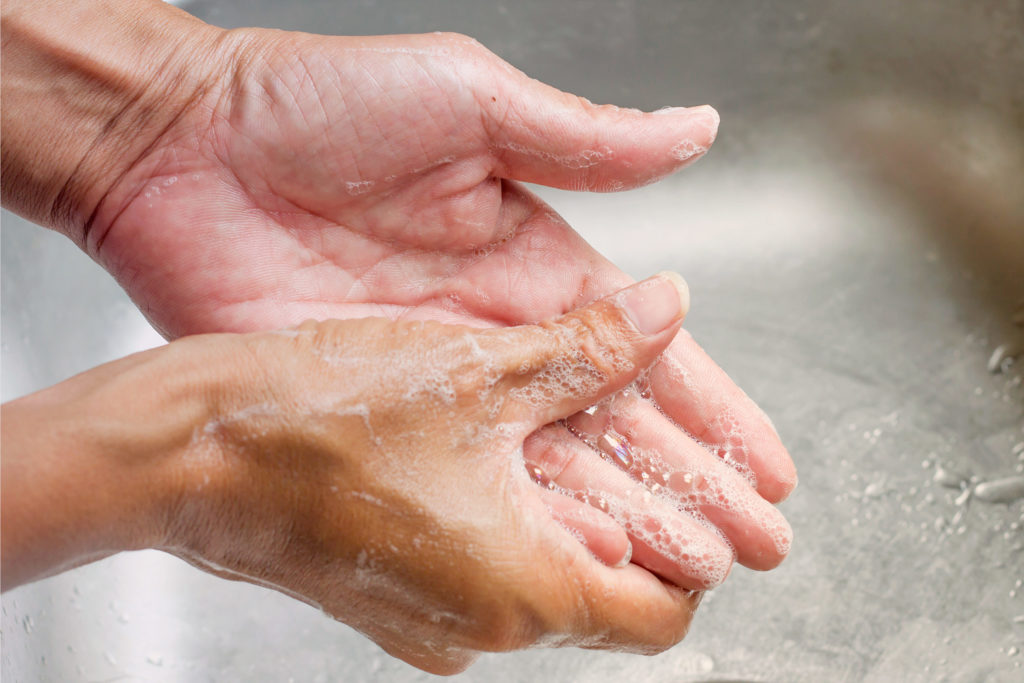 “It is still premature to say that probiotics can prevent colds and flu, but they certainly promote a healthy immune system”. Probiotics are live microorganisms supplements that are added to foods such as yogurt, and can also be purchased in capsules. In a study whose results were published in the British Journal of Sports Medicine, it was observed that athletes who took a probiotic supplement were twice fewer respiratory problems than those in the control group. Deriving some benefit, however, requires to consume between one and ten billion viable units (or colony-forming units, CFU) of probiotic per day. Make sure you buy products bearing an indication of the number of CFU. 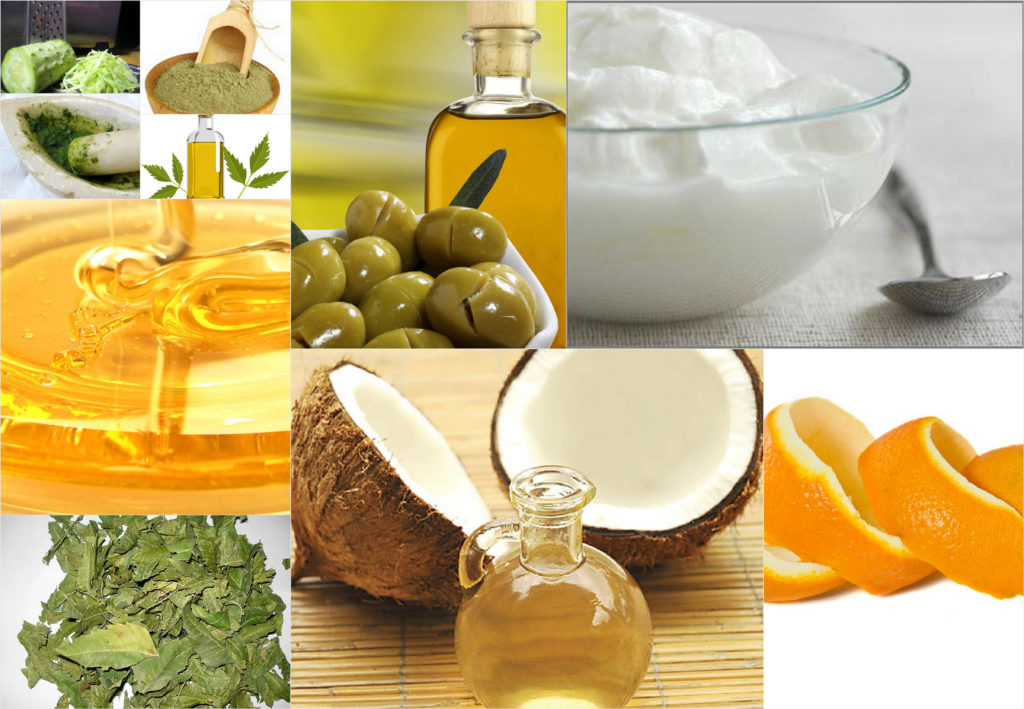 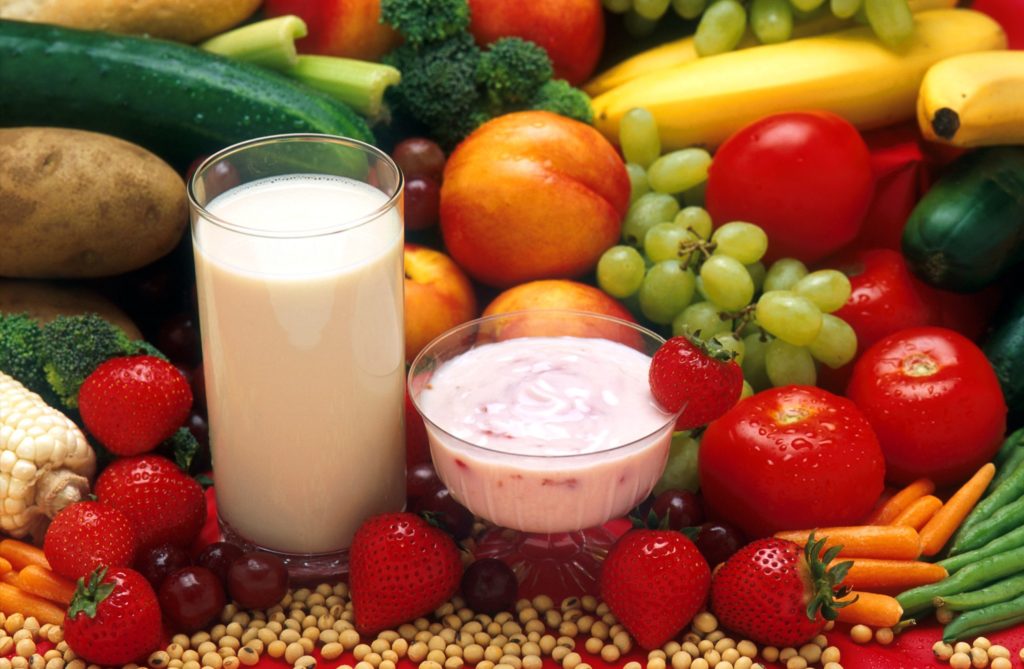 Seventh: What about vitamin C?

Vitamin C, excellence by immunity in the collective consciousness, is the one that comes to mind when one has a little cold. In theory, vitamin C can boost the immune system, especially in the manufacture of T cells in practice, studies about it is less convincing: it does not appear to prevent colds or the flu, except for athletes or persons under intense stress. However, this can be because the assimilation of vitamin C is very limited when it takes large amounts, and primarily because it does not act alone.

Regardless, vitamin C bought in pharmacies, therefore, has little interest in this context, but some potentially interesting shapes (liposomal) begin to appear. These forms are still costly and difficult to access. However, some studies show a real interest of vitamin C to prevent or cure a common cold, when it is taken in conjunction with zinc (sublingual in study). 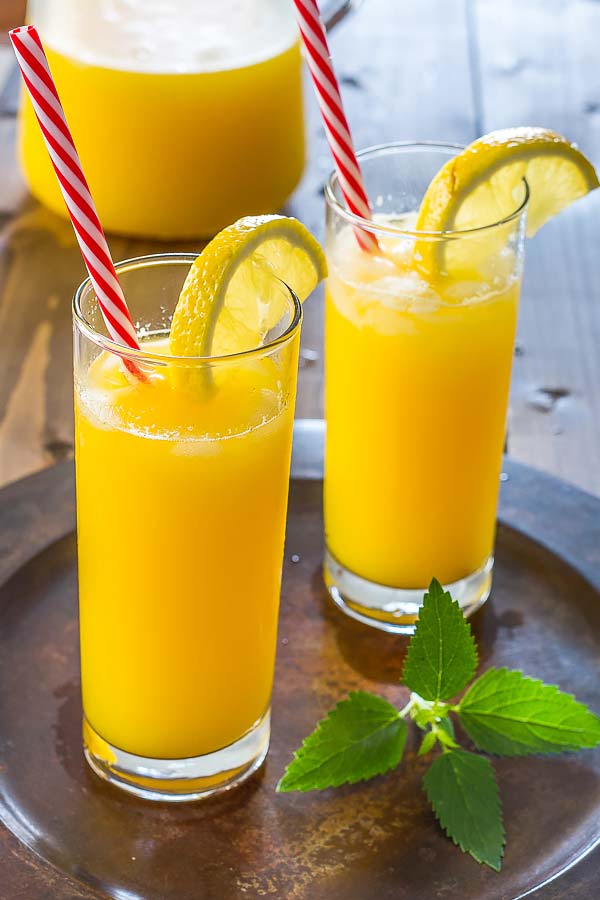 Researchers showed that ginseng helped prevent colds when it took at the onset of symptoms. As part of a larger project funded by the Ministry of Research and Innovation of Ontario, researchers from the University of Western Ontario are currently conducting a study to determine the variety of the most effective and ginseng the proper dosage. Spirulina, a blue-green alga sold in health food stores, is also promising. In a study conducted in May 2008, German researchers have discovered that spirulina preparations, zinc and powdered acerola (small tropical fruit rich in vitamin C) had anti-inflammatory and antioxidant potentials.

However, it will conduct further studies to determine whether long-term use of this kind of preparation strengthens the immune defense and reduces the risk of suffering a cold or the flu. (Consult a physician or other healthcare professional before taking supplements.) 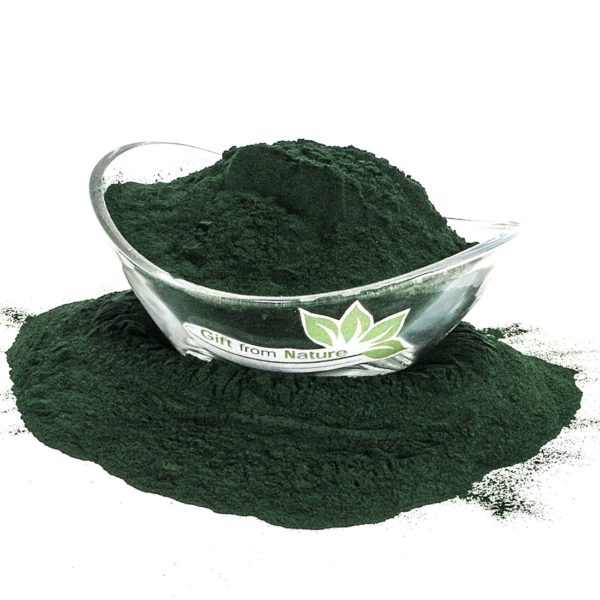 Finnish researchers found that those with blood levels of vitamin D were low running a half times more likely than the others to catch a respiratory infection. In another study conducted to assess the effects of vitamin D supplementation (2000 IU per day) on bone density in African American women, the researchers found those who took the supplement had three times fewer symptoms of colds and flu than those in the placebo group. (Health Canada recommends 200 IU per day for adults under 50 ns and 400 IU for those over 50 years.) 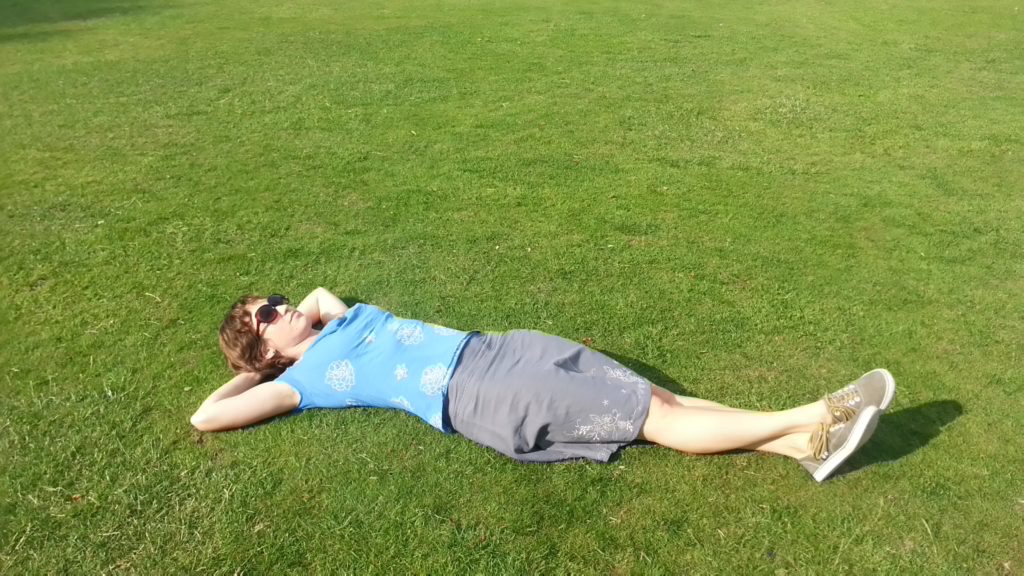 Tenth: The power of garlic

Garlic has been many studies on a variety of pathologies, ranging from colds to cancers. It was very effective against bacteria, viruses, and fungi. Only problem: most of these studies were conducted in vitro and in rats, and those carried out on humans are not perfect. In 2006, a large observational study showed an inverse correlation between the consumption of garlic and onions and the risk of cancer. It is not yet known which compounds in garlic act for what purpose: there is a good chance that they act synergistically. Also, certain compounds are heat sensitive, so they should not overcook them and crush them so that various compounds are mixed. Moreover, the amount of garlic required for a real effect may be difficult to apply in everyday life, at least to compel a real discipline or take supplements. 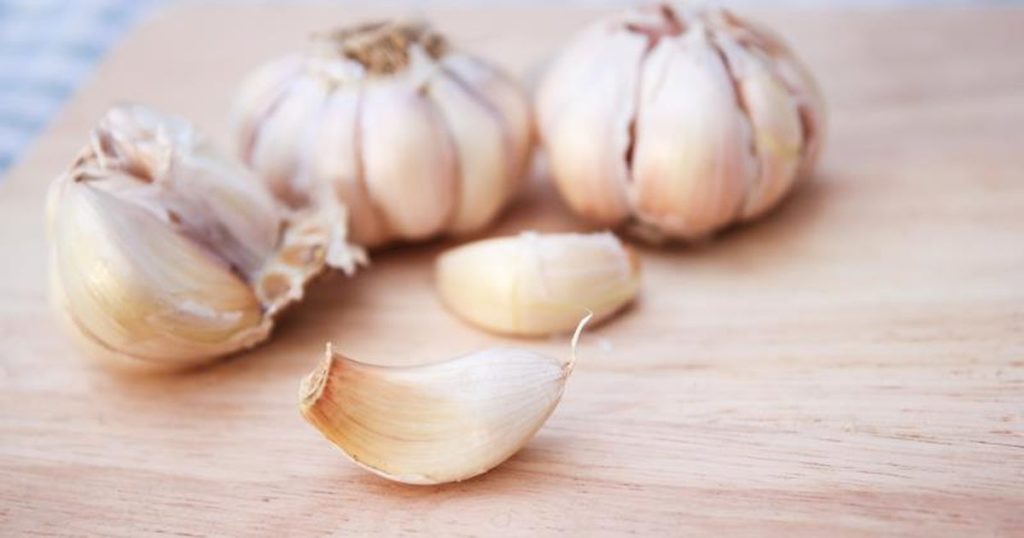 How to know if our immunity fails?

The immune system is so complex that it is difficult to know if it works at its optimum state (in any case, there is little chance, if only because we live in a society where water, air, and the food we eat are polluted to varying degrees). Nevertheless, some clues can alert us to a really poor immunity: 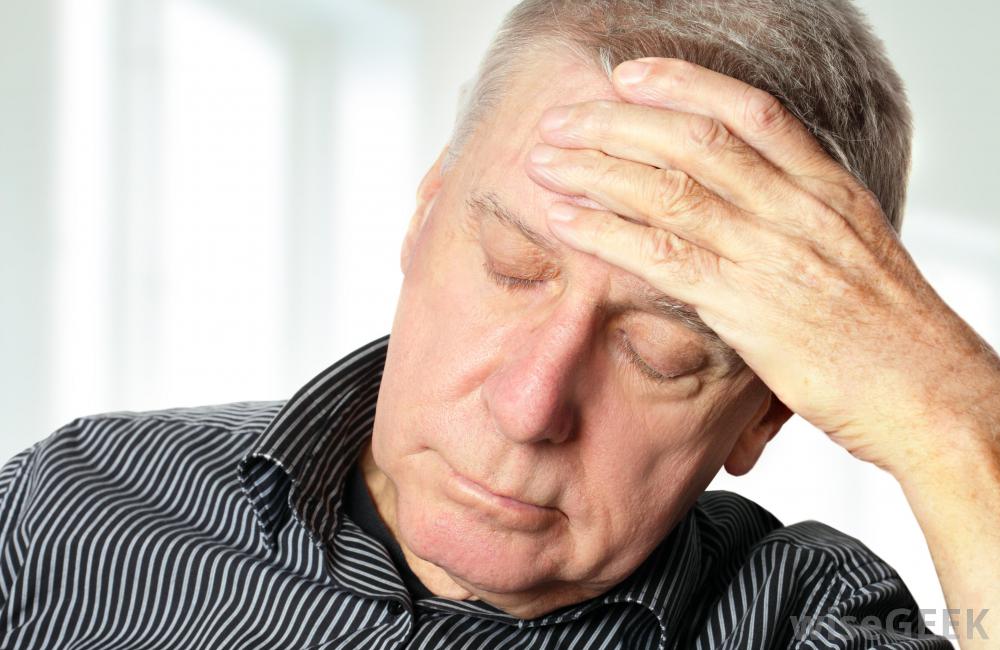 Many factors influence immunity by decreasing or increasing. When our immunity is weakened, we speak of immunosuppression or immune deficiency. The elements and causes are numerous: age, disease, malnutrition, physical inactivity or otherwise overtraining, overweight, stress, lack of sleep, pollutants, tobacco use, alcohol in excess, hard drugs, etc.

Healthy life Conversely, good immunity is enhanced by a combination of factors: healthy lifestyle, physical activity, stress control and/or meditative practice, maintaining good muscle mass, sleep repairer, nutrition, etc. Food is, therefore, only a small part of which promotes a good immune system, but it is certainly not a party to ignore, and most importantly, there would be some good reflexes to take to improve immunity. 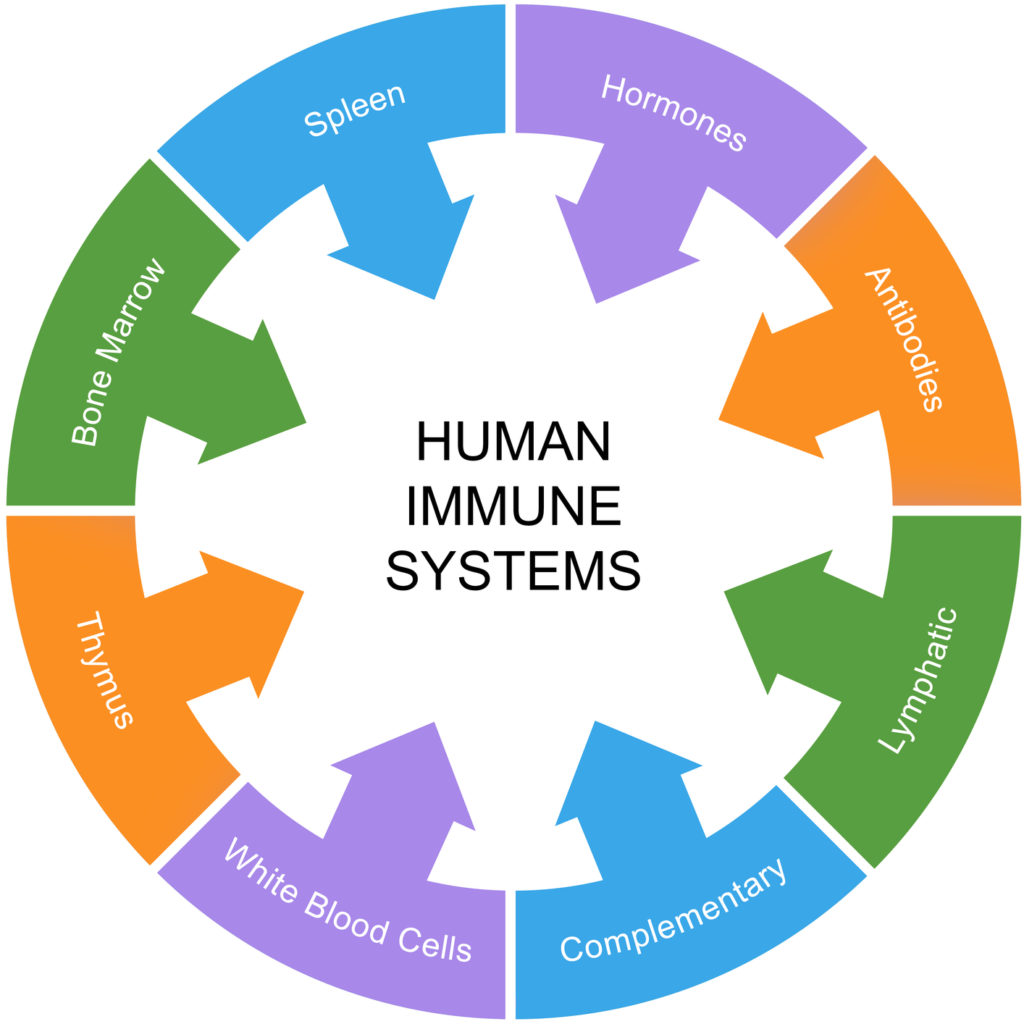 An army in the service of our survival

Since the dawn of time, all our biological programming is focused on two well-defined activities: reproduction and survival. It almost would eventually forget, but every second, our survival is threatened: viruses, bacteria, fungi, and other parasites that are ubiquitous around us, could destroy us in no time if we did not have a defense system also improved the immune system effectively. The immune system is complex,  involving many organs (called the lymphoid organs) distributed throughout the body; our immune system constantly protects us against many threats. It is, therefore, absolutely crucial to maintain this set in good condition.

Salt Intake and The Consequence of High Blood Pressure