Either red, black, or white,  Radish (daikon) is a crunchy vegetable, refreshing and slightly spicy. Its leaves are also edible. Like most crucifers, it contains antioxidants and bioactive compounds that would protect against some cancers. Fresh and crisp, red radish is the spring drink of choice (so delicious with butter) but it is also one of our best allies!

Several epidemiological studies have shown that high consumption of vegetables and fruit reduces the risk of cardiovascular disease, certain cancers, and other diseases. The presence of antioxidants in fruits and vegetables may play a role in that protection.

Cancer prevention: Several studies have shown that regular consumption of vegetables from the cruciferous family (e.g.: radish, turnip, kohlrabi, cabbage, cauliflower, broccoli) could prevent some cancers, such as lung, ovary, and kidney (for Women).

Active compounds in white radish (isothiocyanates) demonstrated in vitro anti-mutagenic properties, which have a role to play in preventing cancer. Several antioxidants in radish, including anthocyanins and kaempferol, would provide protection against cancer by reducing the formation of tumors in animals and the growth of cancer cells in vitro. Researchers have also demonstrated that antioxidants black radish had an effect on lipid levels in intestinal cells and contribute to the prevention of colon cancer. 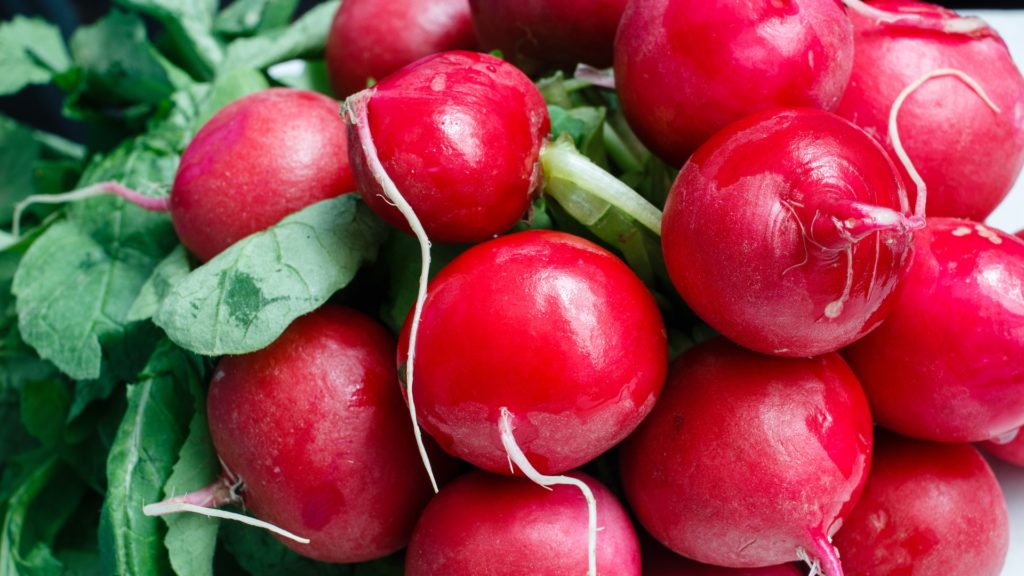 cardiovascular health: A daily intake of cruciferous vegetables is associated with lower blood levels of homocysteine, which would decrease the risk of cardiovascular disease. A study in animals has shown that compounds from the white radish (isothiocyanates) decreased the growth of vascular cells whose overgrowth is associated with certain cardiovascular diseases. Some radish antioxidants could decrease cholesterol, triglycerides, and blood glucose also it would protect against oxidation of blood lipids in an animal.

Digestive system: Several animal studies have shown that the root and leaves of radish contain substances that can accentuate the intestinal motility.

Memory: A study in elderly women concluded that consumption of cruciferous cognitive slows the decline.

To Energize: Radishes are low in calories (even if we take our butter). Rich in vitamin C, B, potassium, and sodium, they are nevertheless a bowl of energy for the body!

Antioxidant: Like most fruits and vegetables, radishes are rich in antioxidants and fiber that protect the body. They would prevent cardiovascular disease, other diseases related to aging, and certain cancers, notably colon, kidney, and stomach.

Against fever: Radishes falling body temperature and eliminate toxins, so they relieve fever!

Detox: Because it evolves deeply under the ground, Its composition was thus 90% water. So in addition to being good for the line, its consumption helps eliminate toxins.

Against colds: Rich in sulfur, potassium, calcium, and magnesium, radishes act against infections of the nose, throat, trachea, and lungs. They disinfect and protect the body.

Against urinary disorders: Radishes increase the production of urine. Consisting of water and food detox, they cleanse the kidneys and urinary system. Radishes therefore suitable to accompany the treatment of cystitis and various urinary disorders.

Good for skin: Rich in vitamin C and B, radishes are real assets beauty. They favor the decrease redness and help skin maintain stable levels of hydration. It is therefore ideal for all skin types! 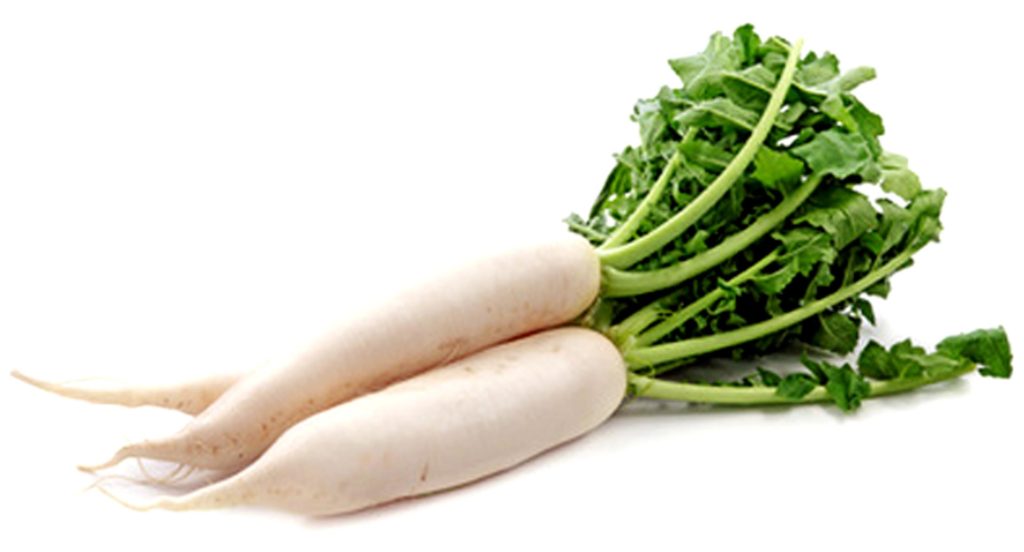 Radish contains different types of antioxidants, compounds that protect body cells from damage caused by free radicals and would prevent the development of cardiovascular diseases, certain cancers, and other related diseases. Red radish contains anthocyanins, mainly pelargonidin’s, while white radish contains kaempferol (a flavonol). The different varieties of radish also contain peroxidase, an antioxidant enzyme. These compounds have demonstrated in vitro and in animals promising effects for the prevention of cancer11, but further studies are still needed to determine whether the effects would be similar in humans.

Like most cruciferous vegetables, radish contains glucosinolates. Glucosinolates radish have the ability to transform into active molecules (isothiocyanates) when the food that contains them is chopped, chewed, or contact the intestinal bacterial flora. Cooking cruciferous vegetables, however, causes a loss of glucosinolates in the cooking water. The black radish would contain two to five times more glucosinolates than some varieties of red or white radish. Several of these molecules help to limit the development of some cancers. Other studies, however, must be conducted to verify these properties apply to humans.

Researchers have identified a compound present in the root of the radish, methylisogermabullone, which has the property accentuate the motility in the animal. The work could explain the use of radish in traditional medicine to stimulate the digestive system and promote bowel. Further human studies are however needed to explore this issue. 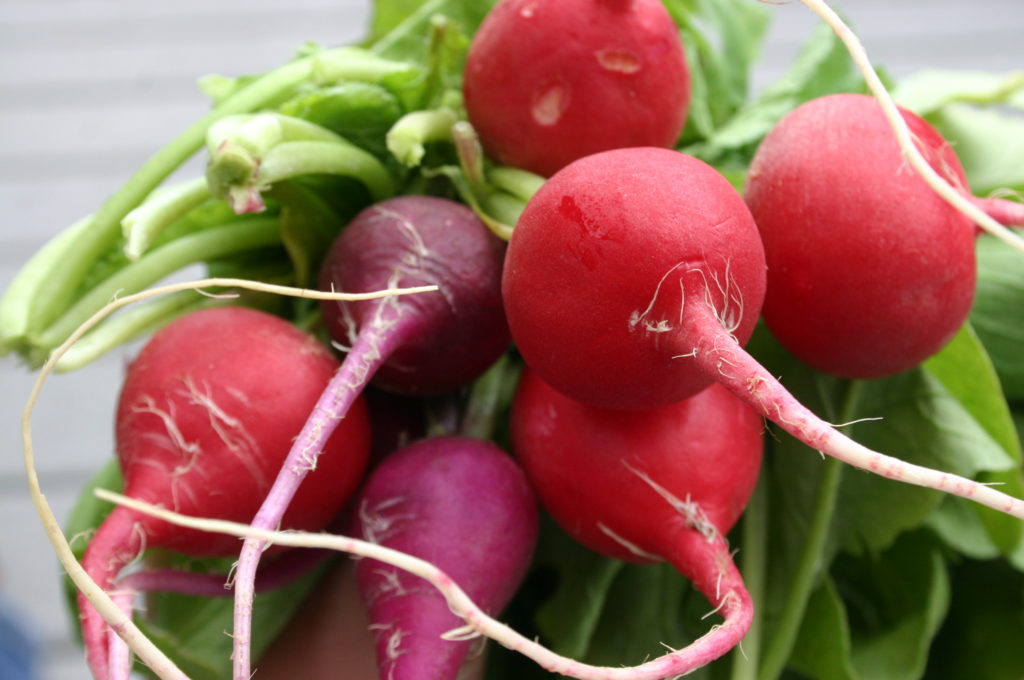 Cruciferous and thyroid cancer: Is there a link between the two?

Cruciferous naturally contain thioglycosides, substances that have a link with cancer of the thyroid gland in animals. However, a meta-analysis of studies from many countries and with more than 5000 people has shown that high consumption of cruciferous was not associated with an increased risk of thyroid cancer in the human.

Some people with irritable bowel syndrome may experience varying degrees, an intolerance of crucifers, such as radish. Limit or avoid foods like those fermentable of the cruciferous family, may alleviate symptoms (abdominal pain, bloating, diarrhea) in people with this syndrome. When the symptoms are mild, or during periods called “remission”, it is sometimes possible to gradually reintegrate these foods, always respecting individual tolerance.

The interaction between cruciferous and certain medications

Indoles, compounds naturally present in cruciferous vegetables may reduce in particular the action of some painkillers such as products containing acetaminophen (Tylenol®, Atasol®, Tempra, etc.) and other drugs combining active ingredient mixture (BENYLIN®, Contac®, Robaxacet®, etc.). People who consume large amounts of cruciferous vegetables should take this into consideration. 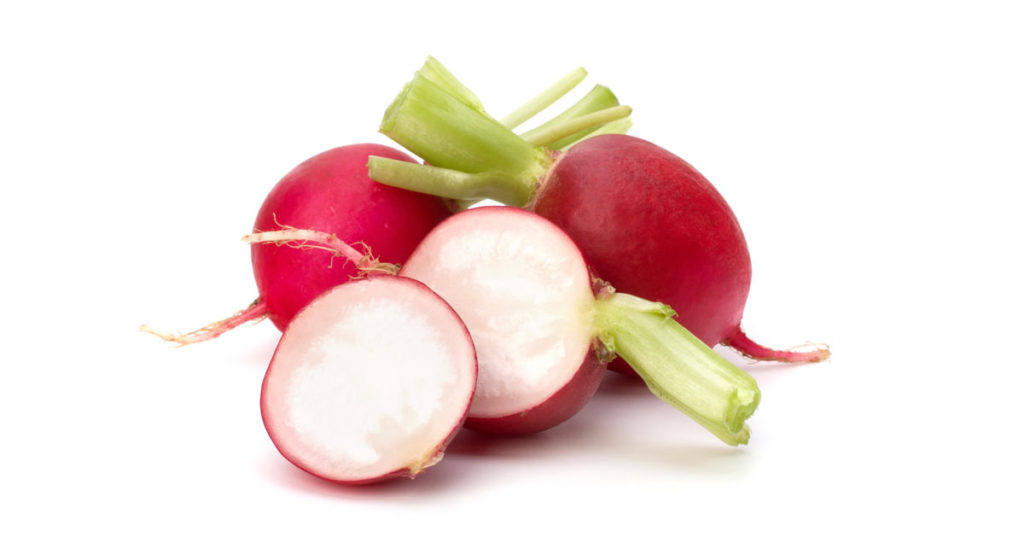 Choose firm roots, smooth and beautiful bright color. The foliage must be very green. To avoid unpleasant surprises, press the flesh with the thumb; if it yields to the pressure, radish is probably hollow and fibrous. Red and black radishes are readily available commercially. Other types, including radish snake, are rare: go see the side of Asian grocery stores, which offer further radish pickled in salt or miso.

Fridge: Four to seven days in a plastic bag or container filled with cold water. Keep the tops separately in the refrigerator, if one wishes to consume them; radish will keep even longer. Asian and black radish radishes can be stored a few weeks or months, in a perforated plastic bag. 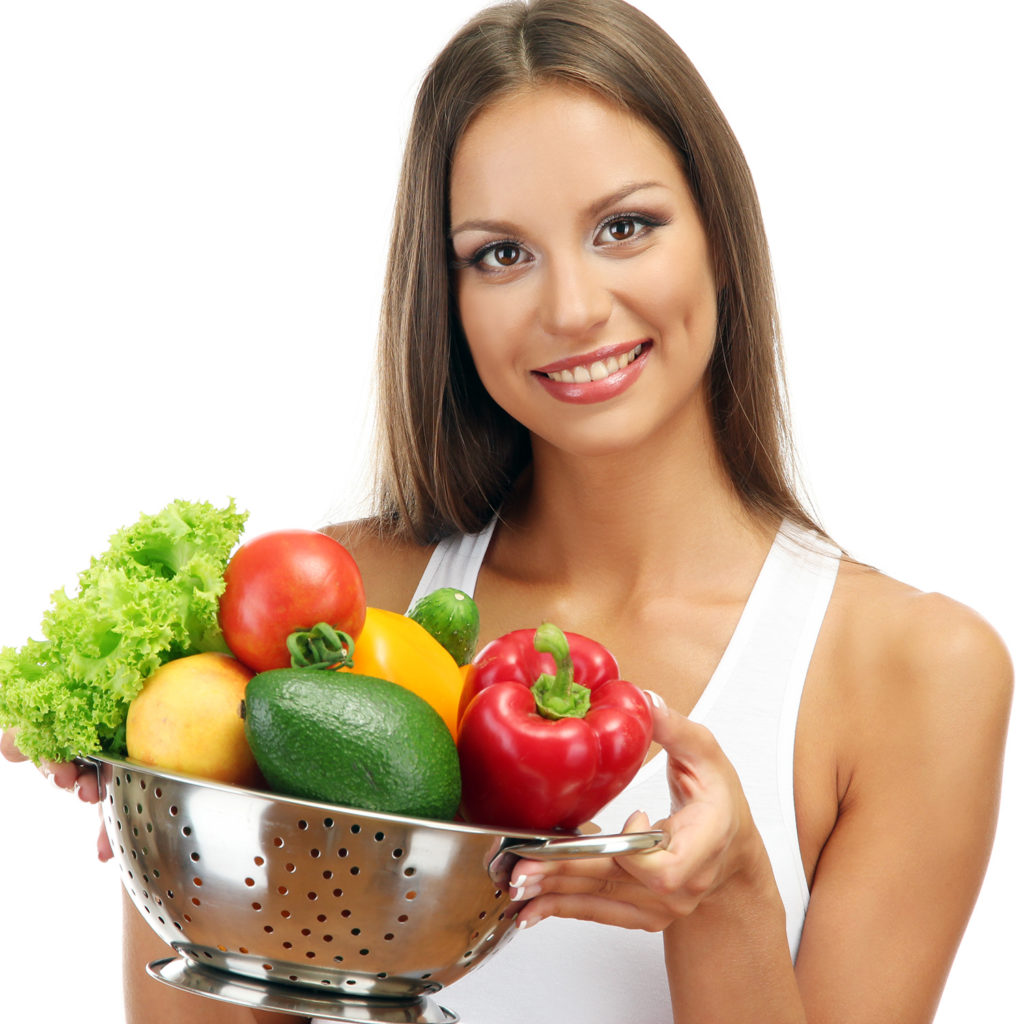