My name is Tyler Spiers and I am a Caucasian white male who grew up in the antique capital of the world, Woodbury, CT. At the age of 12, I wrote my first screenplay titled Kidnapped and went on to star in the Woodbury Middle School stage productions of Ducktales and Bobbysox, Hurricane Smith and the Curse of the Golden Monkey and Little Luncheonette of Terror.

After Middle School, I retired from writing and acting to pursue athletics, binge drinking, and sex while attending Holy Cross High School and the University of Massachusetts. After graduating from UMASS, I un-retired from acting and writing and moved to Hollywood.

For the last eight years, I have studied and performed at The Groundlings, Improv Olympic, and the UCB Theatre. I have created several popular online shows including Classroom, Cleveland’s Next Top Model, Sexual Harassment, and My American Family. I also co-created Planet Unicorn.

I have been featured on Fox News, VH1’s Best Week Ever, LOGO’s New Now Next Awards, IFC TV, and G4’s Attack of the Show. I have also been featured in New York Magazine, Time Out New York, Metromix LA, The Advocate and The Cleveland Plain Dealer.

I am currently developing a half-hour animated comedy for Fremantle Media and am interested in writing, producing, directing and acting on all media platforms. Thank you for reading this biography.
www.tylerspiers.com 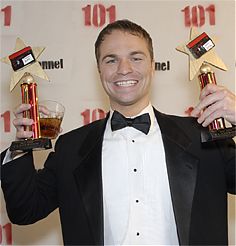 Working On
Developing a half-hour animated comedy for FreMantle Media.

Simple Steps for Drawing a Hamster